Ekrem Imamoglu, the Mayor of Istanbul, visited ISTON after the Company had been awarded with “gold certificate” by the International Concrete Sustainability Council. Having been listed among the top 500 companies of Türkiye, ISTON’s gold certificate was received by Ekrem Imamoglu on behalf of the Company who said that their goal was to achieve the same with all the municipal companies. Imamoglu also said that the immediate agenda of Istanbul was earthquake which required a supra-political approach and added: “In an environment with such great issues, we will not be a party to the political figures who cannot solve the processes that threat human life and who blab about the Istanbul Canal while earthquake still haunts the minds of people. We can only survive with our institutions. IBB is the driving power and the locomotive of Türkiye in every sense.

” Ekrem Imamoglu, the Mayor of Istanbul, attended to the event where ISTON, a company that meets the urban infrastructure and superstructure equipment element needs of Istanbul, was awarded with gold certificate by the International Concrete Sustainability Council (CSC). Before the event held at the Tuzla plants of ISTON, Imamoglu met with Yavuz Isik, Chairman of European Ready Mixed Concrete Organization (ERMCO) and Turkish Ready Mixed Concrete Association (THBB), and Ziya Gokmen Togay, Director General of ISTON. The top management of IBB was also present at the meeting. Following a private negotiation, the committee proceeded to the ceremonial area. Togay and Isik made the first speeches in the ceremony.

MY GRATITUDE FOR CONTRIBUTORS”

Imamoglu gave the final speech and said: “We are here, at the ceremony, for an honourable certificate. We consider this certificate awarded to IBB and ISTON as the honouring representation of our philosophy which we define as a new approach and a new generation of municipal services and which we have been implementing since 2019. We express our gratitude for everyone who has contributed to this process.” Having stated that the award of the Hadimkoy plant of ISTON was received in Tuzla, Imamoglu also wished that the Tuzla plant would achieve the same success. Imamoglu emphasized that they desired to attain such success with all the municipal organizations and that their plans are made to that end.

“IF WE PREVENT URBAN TREACHERY, WE CAN SEE THAT CONCRETE IS INNOCENT”

Imamoglu expressed that concrete is necessary for Türkiye and the world and added: “However, concrete should be defined reasonably and accurately. We must create orderly and liveable cities and countries by integrating with engineering, architecture, planning and management. In this creation, concrete is a significant shareholder. Concrete is a necessary tool in many visible and invisible aspects of cities and countries. Therefore, it is not concrete who is guilty. Sure we can speak of an offense. I should further quote that there are regimes that betray cities, as some officials suggest time to time. If we can prevent this betrayal and include reason and science as the greatest shareholders in this process, we can see how much concrete is innocent actually. If we blame concrete but do not include these principles in the process, we can only be unjust to concrete. In fact, the responsible parties of this crime are executives, technicians, decision-makers and implementers.”

“THIS CERTIFICATE ENHANCES THE RESPONSIBILITY OF ISTON”

Stating that ISTON is a significant institution, Imamoglu thanked to everyone who contributed to the company until today. “We want to further improve this process and the company by adopting a transparent and accountable administration and offering a management which acknowledges that each and every penny actually belongs to the public. This certificate enhances the responsibility of ISTON. We should not forget that these steps do not only concern the people of Istanbul and IBB but also all the municipalities, institutions and organizations. We have already aimed that our subsidiaries should be able to render services abroad and continue their development to that end.”

“EARTHQUAKE HAS ALWAYS BEEN OUR AGENDA”

Imamoglu said that Istanbul must have earthquake resistant buildings and added: “This has always been on our agenda. We continued our studies also during the COVID-19 pandemic and ISTON is a part of these studies. We have initiated a process as regards to the measurability of the building stock of Istanbul. We have organized a hackathon recently for earthquake and achieved valuable and effective results. Currently, we have completed the projects and commenced procedures for two ‘Earthquake Training Parks’. We also collaborated with KIPTAS for meeting safe building needs. As regards to social housing, we will never let allowable prices against low quality. All these are parts of the solution of the earthquake issue of Istanbul and the most significant among them is concrete quality.”

“EARTHQUAKE: THE THREAT THAT AWAITS US”

Emphasizing that Istanbul has a dense population, Imamoglu also suggested that it is of great importance to do in-situ transformation and reinforcement. Imamoglu remarked that there is a need for all the industrial shareholders in urban transformation and said: “Previously, I transmitted this to the Minister of Urbanization. We mentioned that a work should be carried out with superior mind and there is no other way to solve the earthquake issue. We also expressed that Istanbul needs an ‘Earthquake Council’. The COVID-19 pandemic will surely come to an end. Humans will get over with it. On the other hand, earthquake is a threat waiting at the threshold since we don’t know when it will come. It is also a great trauma for Turkish economy. God forbid, it may lead to a greater trauma than the COVID-19 pandemic. Of course, the process should be governed by the Ministry while IBB and the Governorate should be the locomotives of it. Then we can make it a political debate if we cannot extend the process over a period of time and render it a social issue.”

“IBB IS THE DRIVING POWER OF TÜRKİYE”

After reminding that earthquake is the main issue, Imamoglu said that he had sent a letter to Murat Kurum, the Minister of Environment and Urbanization, 3 weeks ago. Imamoglu said: “No one can make it a part of political staggering. Our common mind and human resources has the capacity and competency to solve this process. Only we should be allowed to do it. Earthquake is a supra-political issue and must not be used as a political material. This is not the duty of only IBB or the government. As long as we do not prioritize this issue, some may come and babble and may speak of the Istanbul Canal project in such a time. In an environment with such great issues, we will not be a party to the political figures who cannot solve the processes that threat human life and who blab about the Istanbul Canal while earthquake still haunts the minds of people. We can only survive with our institutions. IBB is the driving power and the locomotive of Türkiye in every sense. The subsidiaries should also feel this responsibility as ISTON does. Today, we experience a good example of it.

”IMAMOGLU OFFERED THE CERTIFICATE TO TOGAY, DIRECTOR GENERAL OF ISTON

After the speeches, the certificate was presented. Imamoglu received the ‘Certification System for Responsible Use of Resources, Gold Certificate by the International Concrete Sustainability Council’ from Isik. Imamoglu then offered the certificate to Togay, Director General of ISTON. After the event, Imamoglu and his committee examined the Tuzla plants of ISTON.

Having ensured administrative, environmental, social and economic criteria, ISTON has proved with this certificate that, as a producer, it complied with the international standards regarding the use of resources. Certification System for Responsible Use of Resources, which is recognized worldwide as regards to concrete industry and concrete components, will bring industrial precedence to ISTON in prestigious buildings as a preferable company. The certificate also means a priority of preference in private sector projects where Green Building Certificate is required and in public tenders where “Green Purchase” is in question. Apart from that, the certification system further provides an opportunity for ISTON to avail of financial incentives concerning sustainable construction. ISTON continues its activities to get the International Concrete Sustainability Council’s (CSC) Certification System for Responsible Use of Resources for the other plants. 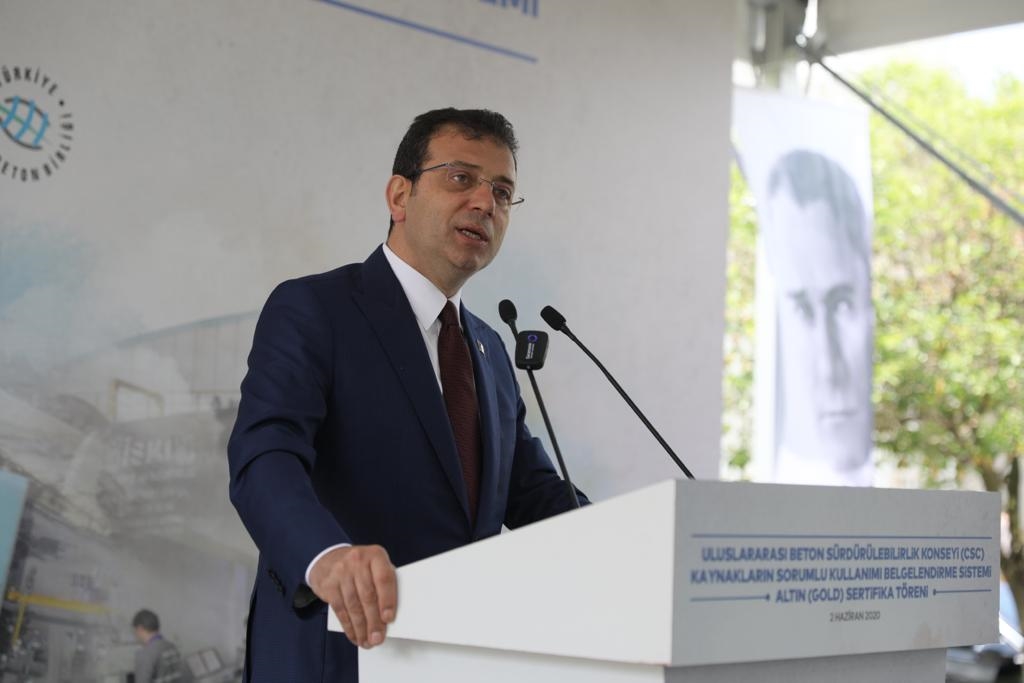 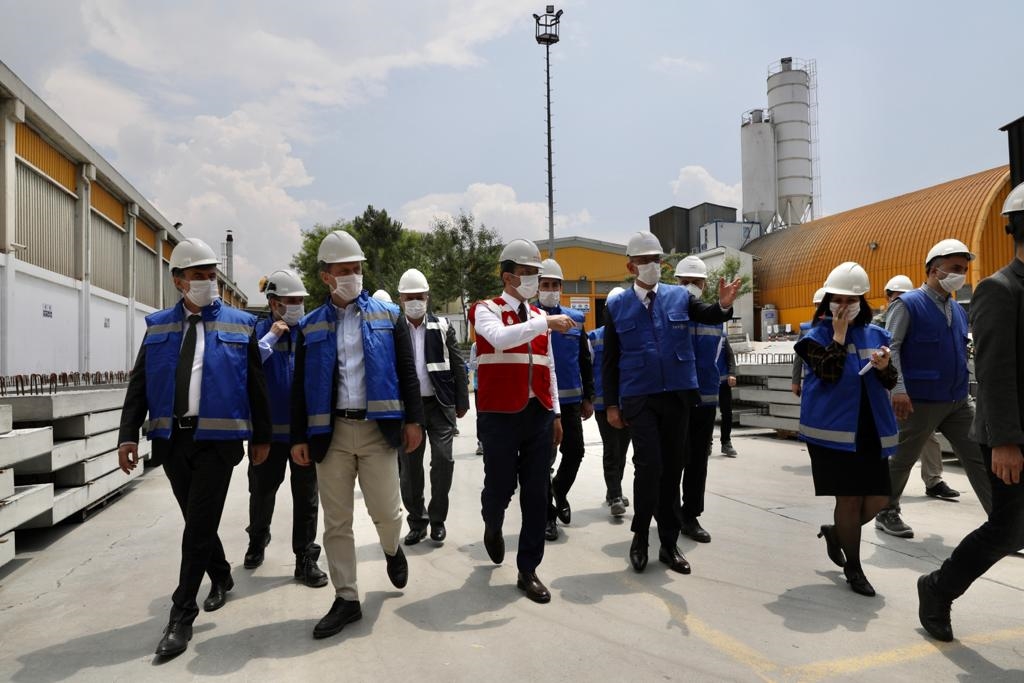 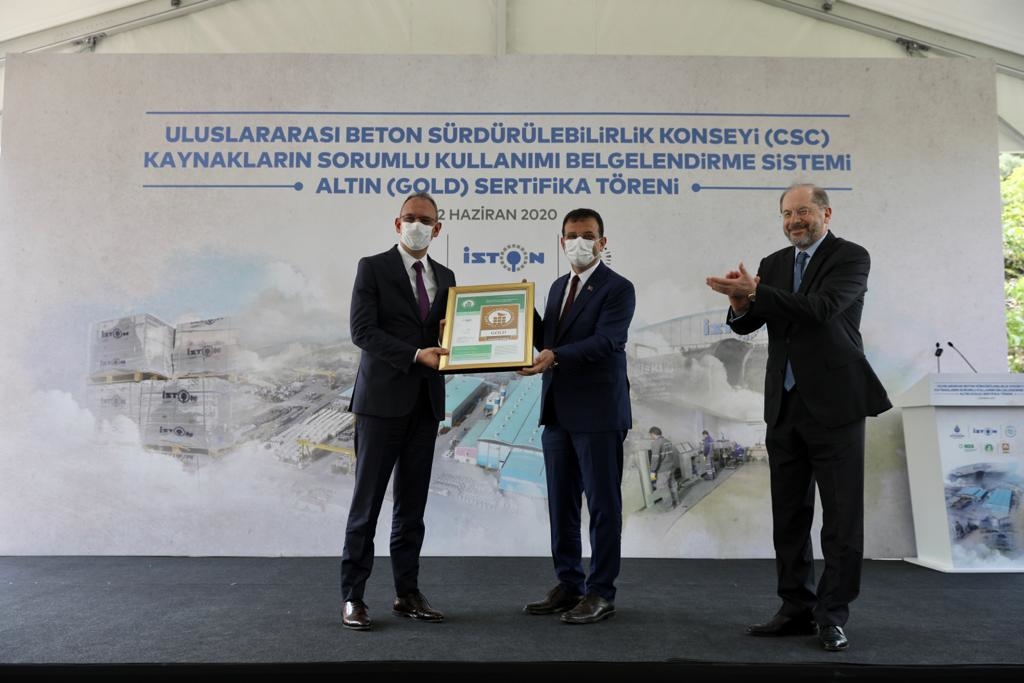 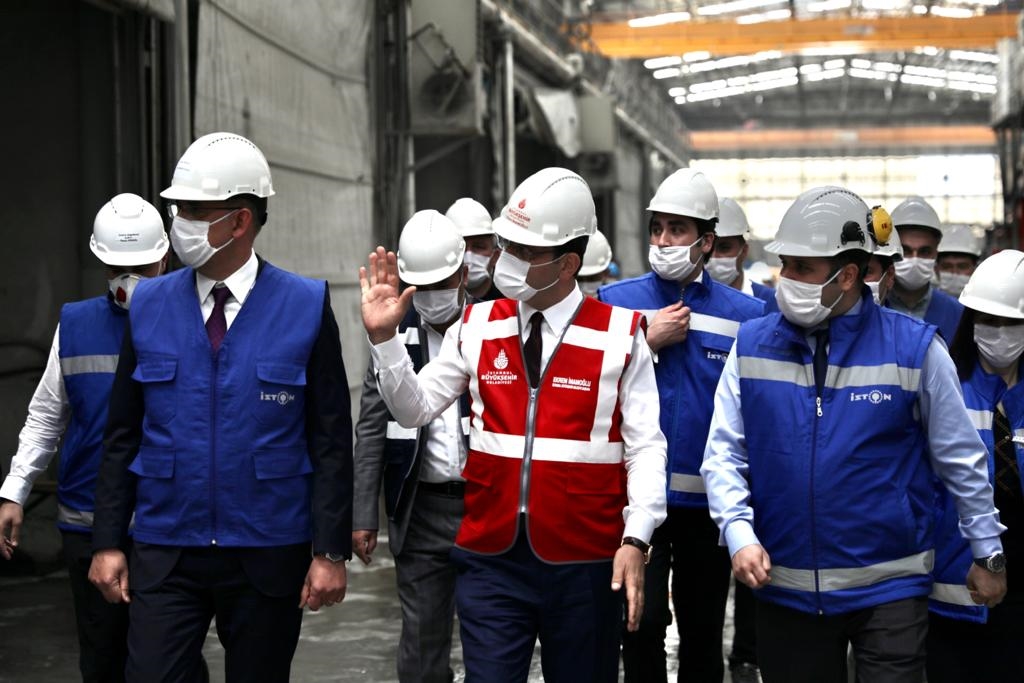 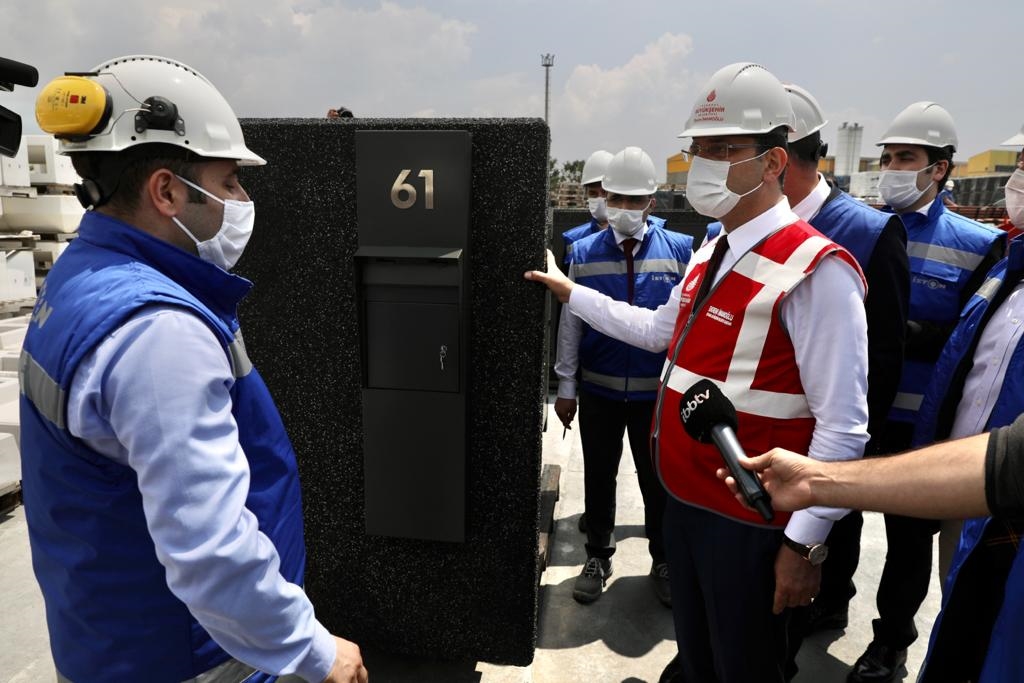 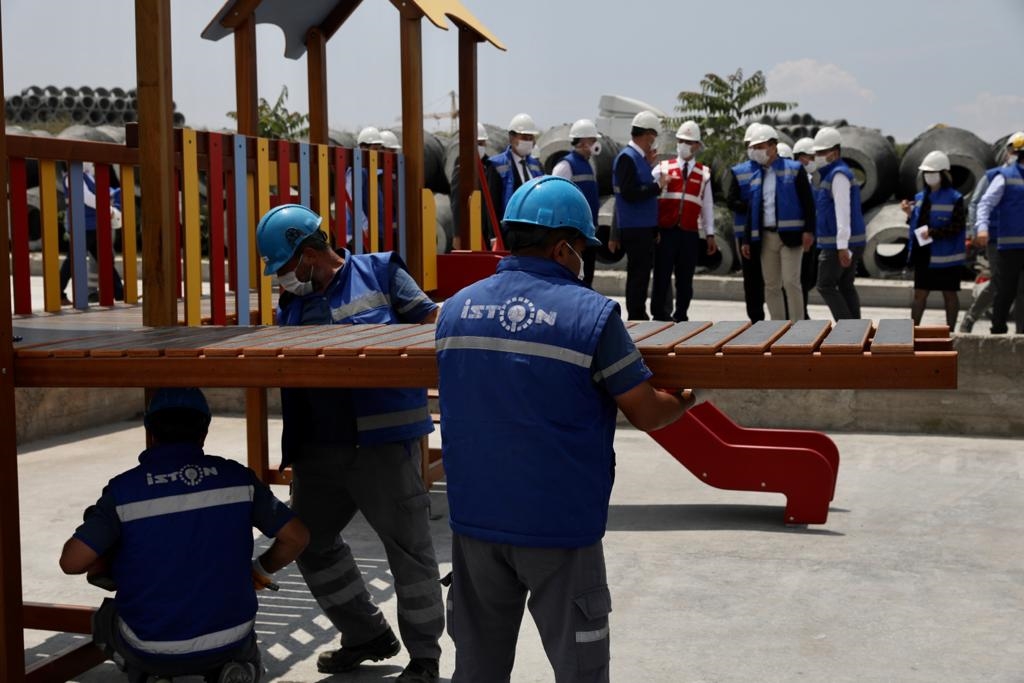 Cookies are used limited to the purposes of the Law on the Protection of Personal Data No. 6698 and in accordance with the legislation. For detailed information, you can review our cookie policy